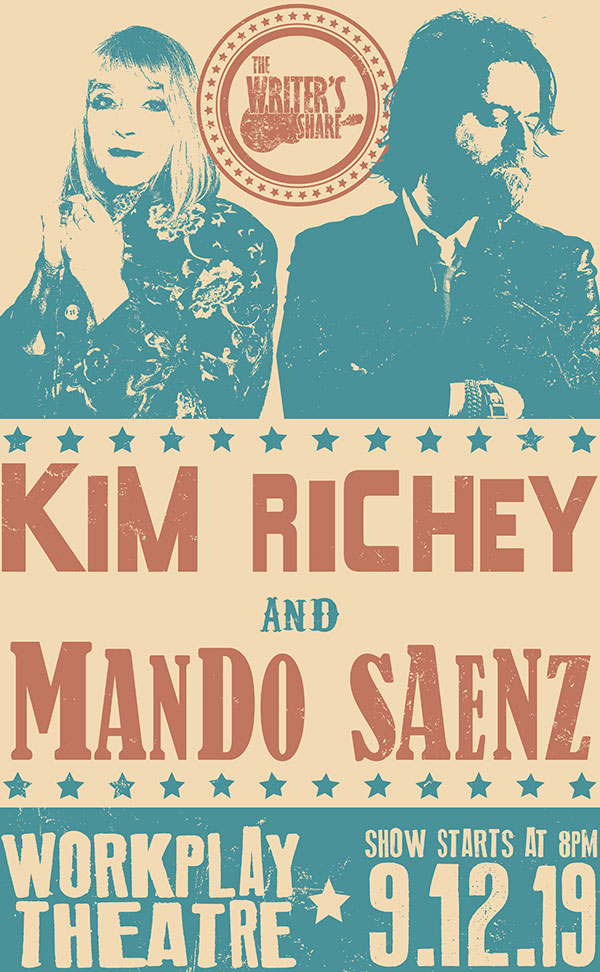 As we look forward to the Fall – and cooler weather – The Writer’s Share is thrilled to announce that we will begin the season on Thursday, September 12, in the WorkPlay Theater with one of our favorite songwriters, Mando Saenz, and one of the greatest writers around, Kim Richey.

Kim’s albums have been named “Top Record” by Time and “Best Alt-Country by People magazines. Her songs have been cut by folks like Trisha Yearwood (the Grammy-nominated “Baby, I Lied”), Radney Foster (his #1 hit “Nobody Wins”) and Brooks & Dunn (“Every River”). She has also contributed vocals to records by other artists such as Jason Isbell, Shawn Colvin, Rodney Crowell, My Morning Jacket’s Carl Broemel and Wilco’s Pat Sansone. Her latest – and 9th — album, Edgeland, is equally impressive.

Even though their individual resumes are impressive, what will make this a great evening is that Kim and Mando frequently write together. Just take a listen to songs like “Breakaway Speed,” “Pocket of Red,” or “The Get-Together,” and you’ll get an idea of how their talents combine for extraordinary songs.