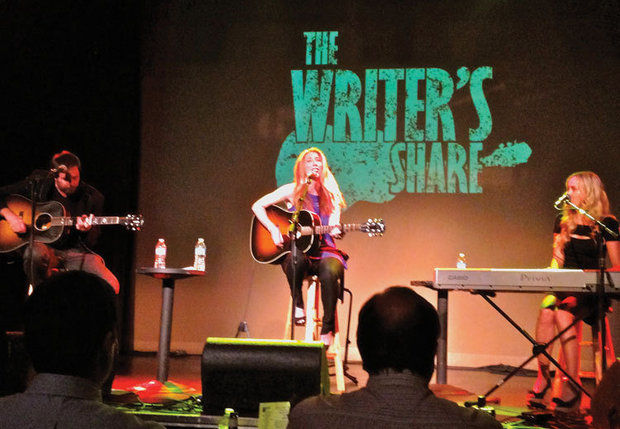 Story of a Life

Birmingham is a city with a story.

Songwriters gather to share craft at The Writers ShareIt makes sense, then, that its residents would be eager to bear witness to the tales of others. Especially if there’s live music involved.

A love of song and story inspired Max Berueffy to create The Writer’s Share, a monthly “in the round” showcase of singer/songwriters at the WorkPlay Theatre.

You may not know the names of the songwriters themselves, outside of Birmingham artists, but you probably know the stars they write for. Acts such as Alabama, George Strait, Waylon Jennings, Alan Jackson, Solomon Burke and Conway Twitty, to name a few.

Sure, it’s fun to see music giants perform their biggest hits. But it’s something else to hear it from the scribes that penned them.

“The writers love the format, they love to play in Birmingham, and they love the intimacy of the WorkPlay Theatre,” Berueffy says.

“Birmingham has a great tradition of music–jazz, gospel, rock, you name it. In the last few years, the live music scene has really grown.”

The Writer’s Share started, fittingly, in the Songwriting Capital of the World: Nashville, Tenn.

After a chance encounter led to a meeting with one of his favorite singer/songwriters, Marcia Ramirez, Berueffy began laying the groundwork for what would later become The Writer’s Share.

Ramirez began introducing Berueffy to several songwriters in Nashville – many of whom frequent The Bluebird Café, a small venue with a similar performance style that has recently been featured on ABC’s “Nashville.”

Once Berueffy had amassed a roster of songwriters, the first installment of The Writer’s Share went down in September 2013, featuring Bill Whyte, Lisa Shaffer and Steve Dean – the latter of whom penned George Strait’s “Round About Way” and Alabama’s “Southern Star,” among others.

Since then, The Writer’s Share has hosted numerous seasoned songwriters. Most hail from Nashville, but some call Birmingham home – talented locals Taylor Hollingsworth, Kate Taylor and Preston Lovinggood performed together this year – and some, like London’s Izo FitzRoy, are a bit farther out.

But The Writer’s Share doesn’t just feature established songwriters. Sometimes they’re right on the precipice of their big break.

Take Shannon Wright and Stephanie Lambring, who performed back in August with Hailey Whitters. A month later, one of the songs that Wright and Lambring had performed at WorkPlay, “Red Flag,” was a centerpiece in an episode of “Nashville.”

That’s the beauty of a series like The Writer’s Share – the songs and stories are bigger than the names that created them. Story is king, just as it should be.

“I guess I’m asking you to trust [us] on this one,” Berueffy says. “You get to hear some of the best songwriters around. You get to hear why the artist wrote the song, learn about the songwriting process or maybe how the song got to be a hit. And it’s cheap! What’s not to like?”

The future certainly feels bright for The Writer’s Share. WBHM, Birmingham’s public radio station, began sponsoring the series in November, and Berueffy is hoping to bring in singer/songwriters from other parts of the country. Berueffy eventually hopes the series will be available through podcasts or radio as well.

One thing that won’t change, however, is the intimacy of the live performances.

If you show up early on a weeknight for The Writer’s Share, you’ll bear witness to amazing stories and chart-topping songs – straight from the folks who wrote them.

“Sometimes the stories they tell are funny, or poignant, or insightful,” says Berueffy. “But they almost always shed light on the art of songwriting. And that’s why people like to hear them.”