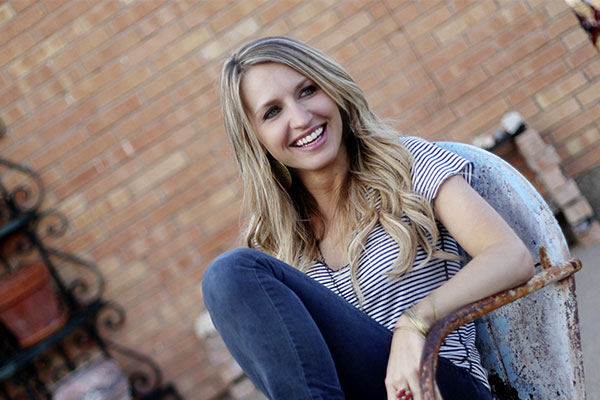 The next country music star has arrived…and her name is Kimberly Kelly. A strong endorsement in a male dominated industry that has increasingly shied away from female talent, but nonetheless true. The quick-witted songstress whose music radiates genuine honesty in a modern-throwback to the 90’s country music era has been independently building a rather impressive fan base. Clever lyrics. Engaging performances. Pure vocals. A touch of mandolin. All traits that make even the most passive listener become an instant fan.

A Texas native turned Nashville resident who counts musical giants Radney Foster and Monty Holmes among her many co-writers, Kimberly has spent the last few years honing in on her songwriting craft and establishing a wide network of musical collaborators. Foster testifies, “Kimberly has an incredible honesty in her songs and her voice. Her songs are about real life, and you can hear it all in her voice —the pain, the love, the joy, the sass. She isn’t just singing a line, she’s living it, and she will make you believe it every time.” And she has lived it.

Like many of her contemporaries, Kelly is rooted in a musical family. She grew up listening to her grandfather’s band, Sterling Kelly and the Hearts, and she spent her early childhood singing duets into the handle of a vacuum cleaner with her older sister, Kristen. An astute student of the genre, Kelly claims influences from Lee Ann Womack, Patty Loveless, Reba McEntire and Dolly Parton, as well as pop stars and rockers like Jewel, Stevie Nicks and Tom Petty—and even fresh Americana acts like Kim Richey and Hayes Carll. In her first Country Weekly feature article in 2015, Kimberly admitted that she was “in love with Randy Travis” and that her and Kristen would steal each other’s CDs. “We had to write our names on our CDs”, she said.

After earning her Masters Degree in Speech Pathology from Texas Women’s University, Kelly began to parlay that hard work and dedication to her music career. Eventually, those childhood vacuum handles turned into microphones as both ladies embarked on separate musical paths that would find Kimberly playing shows with Jason Aldean and The Band Perry, as well as performing for former President George W Bush. Constantly supportive of each other’s musical endeavors, they joined forces in 2012 when Kristen nabbed the coveted opening slot on Brad Paisley’s tour and brought her sister along for background vocals. The same role led to Kimberly’s first time singing from the historical stages of the Grand Ole Opry and the Ryman Auditorium.