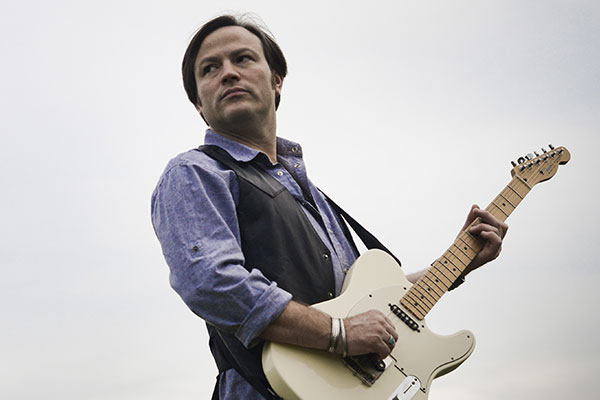 With a John Denver grin and mind full of Alabama attitude, Adam Hood knows the beautiful mess of blue-­‐collar love and everyone on Music Row wants in. Tracks from his critically acclaimed 2011 album The Shape of Things have been cut by Little Big Town, David Nail, Josh Abbott Band, Brian Keane and John Corbett. The legendary Willie Nelson and Leon Russell have each picked Hood for respective national tours.

Free from his contract with Carnival Music, Hood is taking advantage of his newfound independence with his rough and wild fourth studio album Welcome to the Big World. With producer Rachel Loy at the helm, the 11-­‐track collection is a biographical masterpiece that ranges from Delbert McClinton roadhouse rock to Kris Kristofferson storyteller folk, with a mix of timeless two-­‐step shuffles.

Welcome to the Big World kicks off with the split-­‐tempo barnburner “Don’t That Sound Like Love,” which celebrates the sacrifices of love on a budget accented with Freddie King blues guitar and piano riffs in Russell style. A Top 5 hit on both Texas Music Charts, lead single “Trying to Write a Love Song” is a straightforward, booze-­‐ and truck-­‐free anthem about chasing a woman in a hot dress to cure writer’s block.

Moving his beloved daughter three times before the age of 15 provided framework for the striking title track, a coming of age two-­‐step that serves as a roadmap in major life changes. With lyrics, “Welcome to the big world / Welcome to your age / Where everybody says, ‘No one said this was easy.’ / Baby, it’s a big world / A revolution everyday / But you can’t see what I can / The whole thing’s in your hands,” Hood suggests the key to surviving life’s struggles is positive independent thought.

“It’s the heart of the collection,” Hood says. “I’m learning to live with my abilities and be content with my place in life. Those are grownup things to deal with, but in the big world, it’s something we all have to do.” Grammy-­‐nominated hit-­‐maker Will Hoge co-­‐wrote the imagery-­‐ridden “Postcards and Payphones,” a rambling ballad that describes the pain and loneliness of touring life. Charlie Worsham co-­‐wrote the fun-­‐loving “Countriest,” which stars Texas darling Sunny Sweeney in her guest harmony debut. A live and rowdy crowd at Billy’s Icehouse in New Braunfels, Texas backs Hood on the raucous “Bar Band.” Classic “missing you” themes are tackled on the shuffle “Whole Lot of Hard Work,” the Creole accordion-­‐anchored “Stars Around a Cajun Moon” and the heartache-­‐driven “Way Too Long.”

“He Did” is a tribute to his late father Larry Hood, a second generation timber man who lost his battle with colon cancer in 2010. The acoustic tearjerker celebrates inherited habits, both the good and the bad. Closer “I Took a Train” is a salute to one of Hood’s top musical heroes John Prine.

When he’s not making music in Nashville or building his loyal following in Texas, across the Southeast and beyond, Hood can be found in at home in Northport, Alabama where he raises a family and keeps a healthy garden of homegrown vegetables. “I’ve been blessed to have my name listed among my friends’ and heroes’ albums, but nobody’s going to deliver my music like I do,” Hood says with confidence. “These songs probably wouldn’t be suited for anyone else but me. I’m so thankful I still have the desire to write them and get them out there to whomever will listen.”